Known as 'Canada's First Lady of Country Music', Carroll Baker is the perfect example of every value that has made country music what it is: honesty, reality, genuine feeling, hard work, love, family, friendship and respect for others.

Below are some milestone achievements by Carroll. 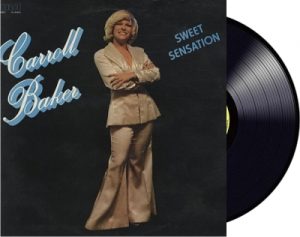 ● Multi CRIA Certified Gold, and Platinum record sales in Canada and Australia.
● She was the first Canadian Country Music Performer to be awarded certified gold record status.
● Carroll’s first top ten record was in 1973 with Ten Little Fingers.  It went to #3 and coincided with the birth of her daughter Candace.
● In 1975 Carroll recorded her first number one record, a song written by Conway Twitty entitled  "I've Never Been This Far Before.”  This was the beginning of her string of number one records, and became her first Gold Record.
● She has had more than 20 number one records, 12 of which were consecutive, a record that remains unbroken in Canada by a Canadian Country Music Artist on the RPM Country Music Charts.
● Carroll’s song ‘One is One Too Many’ was the flip side of one of her records, it received so much airplay that she found herself with a double sided number one record! The song was written by Carroll in her early career and she considers it to be a favourite of all the songs she has written.  It has become an anthem for many AA Meetings around the globe.
● She has recorded duets with Canadian star’s Eddie Eastman, Terry Carisse, Jack Scott and Roger Whittaker.
● Carroll was one of the featured performers in the Northern Lights Super group of Canadian Artists who recorded  the #1 hit song "Tears are not enough."  The song has raised over  $3-million for African famine relief.
● Has had songs she penned recorded by Eddie Eastman, and the Legendary Tom Jones among others.
● Carroll has had twelve consecutive #1 hits and over fifty recorded compositions, including Tonight with Love, Why I Had to Pass this Way, It's My Party, It's Late I Have to Go, Hooked on a Feeling, Love Triangle and Dreamin' Ain't Cheatin'. Her composition I'm An Old Rock 'N Roller was a country chart hit in 1984 for Tom Jones.
● Carroll is an inductee of The Canadian Country Music Hall of Honour renamed The Canadian Country Music Hall of Fame.
● Inductee with the Nova Scotia Country Music Hall of Fame.
● She received Juno Awards for Country Female Vocalist of the Year from 1977 - 1979.
● She received the CCMA Award in 1982 and 1985 for Best Female Vocalist.
● In 1986 Carroll took home the award for Best-Selling Album.
● Canadian Country Music Awards/Big Country Awards:  Multiple Winner of Female Vocalist of The Year, Entertainer of The Year, Artist of The Year, Album of The Year, and Best Selling Album of The Year Foreign or Domestic in Canada.
● The Nova Scotia Country Music Hall of Fame.
● Received a Lifetime Achievement Award from the Province of Nova Scotia.
● Awarded a Lifetime Achievement Award from the Province of Ontario.
● She was  twice awarded International Female Entertainer of The Year in Dallas/Fort Worth Texas.
● First Canadian country singer to appear at the famed Imperial Room in Toronto.
● Appeared on stage of the London Paladium in London, England.
● Appeared at Wembley Stadium.
● She has toured Great Britain extensively and is one of Britain's most well known Canadian exports.
● Recipient of several song writing awards from Socan/BMI. 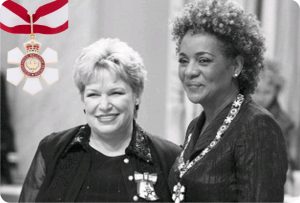 ● Carroll Baker was named to the Order of Canada (This is the highest honour paid to a civilian by their country.)
● 2013 received: The Queen’s Diamond Jubilee Medal, The Duke of Edinburgh Award and The Naval Challenge Award for her charity work.
● Lifetime Achievement Award from Martin Guitar and the Humanitarian Award from Martin Guitar in recognition of her charity work.
● Port Medway, Queen’s County NS  where Carroll grew up honoured her with community signage proclaiming Port Medway 'Home of Carroll Baker, Canada’s Queen of Country Music'. 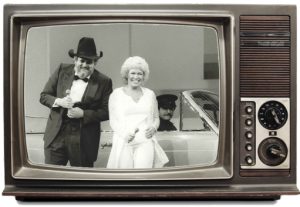 ● Appeared live on CBC's 'Super Specials' in 1978-79.
● In 1998, she starred in the BBS special 'Carroll Baker's Country Classics.'
● Carroll made the history books in Canada when she became the first Canadian performer to do a television special from Nashville Tennessee and the stage of the Grand Ole Opry House.
● First Canadian country singer to appear on the front page of TV Guide.
● Hosted her own TV series for CBC TV, Carroll Baker's Jamboree.
● She was a frequent TV guest on Nashville Now in Nashville for The Nashville Network.
● Four television specials for CBC and two for CTV/Baton Broadcasting.
● Hosted a TV series from Vancouver for CBC TV "Music Music Music" where she performed songs from the 20s, 30s and 40s.
● The first Canadian Country singer to have her own special on The Nashville Network entitled  "Carroll Baker's New Country."
● TV Guest on Roger Whittaker's TV series Sing Out in Great Britain.
● She has appeared as a guest on nearly every Canadian TV show and was the first Canadian country singer to perform on the Juno Awards (1976) which resulted in rave reviews in Newspapers across Canada.