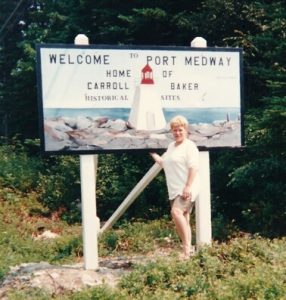 She was the youngest of six children born to Gordon and Iverna Baker.  She had five siblings; three brothers: Fordan, Truman and Willis, and two sisters: Barbara and Rosemary.

Her family was not unlike other families in the small fishing village, getting by with just the basics of life, not being able to afford unnecessary things.  Their one indulgence was a television set. The family would gather around and watch special shows together. So thrilled with this "new" addition to their home, Carroll often laughs about watching shows in French even though she didn't understand what the characters were saying. Life was simple and uncomplicated, and though lacking in the "so called finer things in life", the most important element was plentiful and it didn't cost a dime. LOVE!

Carroll attended elementary school in Port Medway and Mill Village; and high school in Liverpool. She excelled in English, French (must have been all those French shows), Geography, Science and Art.  By the time she entered High School, she was the only child living at home, her brothers and sisters had moved to Ontario.   Her mother missed her children so she and Carroll would visit them. During one visit, they were joined by Carroll's father. That  visit would change the way she had  been living and was the beginning of a life she wouldn't have imagined - even in her wildest dreams.

Carroll's father built fishing boats and sail boats in his spare time.  During the trip to Ontario he visited Metro Marine (The Bronte Yacht Club). Through a twist of fate, he was offered a job by the owner to manage Metro Marine. If he took the job he would have to leave his job with Irving Oil building Breakwaters, Wharfs, and Ferry Slips. This was a stable and decent paying job and provided a better lifestyle for Carroll and her parents. However, a mother's love is a strong emotion and no doubt her father was missing the rest of his children as well;  after  some coaxing the decision was made. Her father accepted the Managerial Position; back home they went to close up their home and give notice to leave his present position at Irving Oil when he had finished his obligatory contract.

In 1965, when Carroll was 16, she and her parents moved to Oakville.  They rented a home and everyone was happy to be together. Unfortunately Carroll found out that things were not at all like they were at home in Port Medway. She found herself much too shy to even attend high school.  She convinced her parents to let her get a job instead of finishing her education. To this day she says it was one of the biggest mistakes she ever made.  Carroll worked at various jobs, a bookstore, a factory, a restaurant, and Canadian Tire. 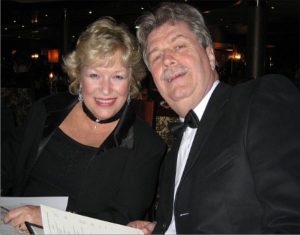 In 1966 she met a handsome Frenchman, John Beaulieu (that French paid off ) and they fell in love. The couple dated for a year, were engaged and then married on April 20, 1968 at St. Dominic's Catholic Church.

Carroll was now employed as a cashier at Loblaw's grocery store and she and John lived in a small, but comfortable apartment in downtown Oakville.

In 1969 they were invited out with friends to a bar in Oakville, the Halton Hotel.  One of her friends told the band that Carroll sang and they should ask her to do a song. Carroll had no idea this had happened. When her name was called to go up and sing she was speechless. She was also underage at the time and the thought of getting caught in a bar by the police was scary. With her husband's encouragement she accepted the invitation and sang "Stand By Your Man."

The rest they say is history.

The band invited her to join them each weekend, eventually moving on to fairs and jamborees across Southern Ontario.

It was on one of those weekends that a man named Roger Burke (who was a musician) asked her if she would be interested in performing at a jamboree near Markham called The Hayloft Jamboree. It was at the jamboree where George Petralia, heard her sing and convinced both she and her husband to accompany him to Thunder Bay to make a record. 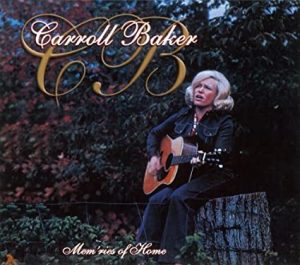 In July of 1970 Carroll, John, George, his wife and family drove to Thunder Bay where she met Don Grashey and Chuck Williams.  Grashey produced her first recordings in Thunder Bay on Grashey's Gaiety Records label. Her first single, "Memories of Home" was a top 20 hit across Canada on the RPM Music Charts.

In 1972 he decided to take her to Nashville to record her first session there. That recording session took place at the famed RCA B Recording Studio where all the greats had recorded.  Carroll’s first top ten record came in 1973 with Ten Little Fingers.  It went to #3 and coincided with the birth of her daughter Candace.

In 1975 Carroll recorded her first number one record, a song written by Conway Twitty entitled  "I've Never Been This Far Before.” This was the beginning of her string of number one records, and became her first Gold Record which launched her into international success!

Carroll has more than 20 number one records, 12 of which were consecutive, a record that remains unbroken in Canada by a Canadian Country Music Artist on the RPM Country Music Charts.

After 14 albums, 4 compilation albums and 55 singles Carroll is still touring and wowing audiences coast to coast.